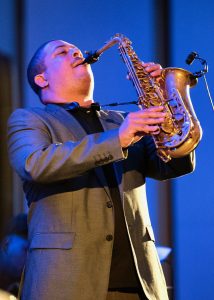 Known from the film “Cold War” by Paweł Pawlikowski, awarded for directing at the Cannes Film Festival in 2018. Three Oscar 2019 nominations.

He was born in Cuba, where he graduated from the Amadeo Roldan National Music Conservatory as a saxophone teacher and instrumentalist. For several years he played in La Zorra y El Cuervo – the only one Jazz Club in Cuba. During this period he was invited to many joint music projects with outstanding Cuban jazz musicians – including: José Miguel Credo (El Greco), Díakar, Paquito D’Rivera, George Benson, and Steve Coleman. While traveling with Top Secret – a group led by the outstanding trumpeter Jose Miguel Credo (El Greco), in 2001 he decided to settle in Costa Rica. There he became one of the best and best recognized jazz musicians. On a professional level, he collaborated with artists such as Walter Flores (Grammy winner), Robert Aguilar and “Chocolate Band” – to name a few. Currently, Luis Nubiola lives in Europe, where he continues his search and develops as an artist